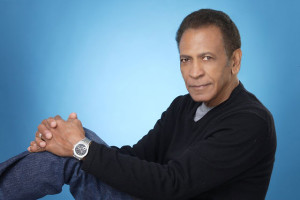 Austin Stoker began acting at age eleven. Born and raised in Port-of-Spain, Trinidad, Austin acquired his Cambridge University Senior Certificate with “Distinction in English”. He attributes his affinity for acting to having been a movie fan since age five and, moreover, since same age, a devoted participant, in the Trinidad Carnival – reportedly “The World’s Most Colorful Festival”.

As a percussionist//dancer with H.D.C., Austin was one of a special “Trio” of young Trinidadian musicians who – together with H.D.C. artistic founder, the legendary dancer, painter, photographer and “Seven-Up Un-cola” commercial pitchman, Geoffrey Holder – landed contract roles in the Truman Capote/Harold Arlen Broadway Musical “House Of Flowers”, choreographed originally by George Balanchine and directed by Herbert Ross.

From the very first day of rehearsal at the Alvin (now Neil Simon) Theater, the Trio was an immediate sensation. The musicians and cast could not resist this “new sound” produced on the Trio’s unusual instruments. Austin recalls the show’s writer, Mr. Truman Capote, so impressed, suggesting to the composer, Mr. Harold Arlen: “Harold, you have to write something for these boys to play on their lovely drums!”. The result can be heard, with full orchestral accompaniment, in the recorded rendition of the full-cast, show-stopping “Smellin’ of Vanilla” on the House Of Flowers LP, Columbia Masterworks ML4969.

The Broadway cast, headlined by the legendary Pearl Bailey, included singer/actress Diahann Carroll and Ray Walston, Tony Award winner for “Best Actor” for “Damn Yankees” and television’s “My Favorite Martian” star. Now, they were in a unique situation: As contract soloists/musicians in a Broadway production they were required to be members of the American Federation of Musicians. But only United States citizens could be granted membership in the A.F. of M. and they were “visitors” with temporary visas. How would a show solve such a problem?

The show’s producer, arranged a demonstration of their performance at the union office. They left their “lovely drums” outside the office door. “What instruments do they play?”, asked the union delegate when they were introduced. They simply stepped outside and returned immediately with their “instruments”. At the sight of the cut-off bottom-end of three empty 55-gallon metal oil barrels, the union delegate, totally puzzled, exclaimed: “They’re ash cans!. . .” Before they got through the first four measures of their audition tune — a rendition of The Star Spangled Banner — the delegate, his jaw almost “on the desk”, queried in total amazement: “What. . . you got strings under there??”

The Trio was instantly enrolled, on the spot, in A.F.of M., Local 802 of New York, setting an unprecedented exception to the U.S.-citizens-only rule. Internationally known today for its extensive use world-wide, the instrument was invented in Trinidad and first introduced professionally to American audiences via the Broadway stage by H.D.C.’s Trio of steel drums– the only new instrument of the Twentieth Century .

House Of Flowers closed after 165 performances. A “Review” called Enid Mosier & Her Trinidad Steel Band was formed – an idea conceived, staged and financed by director Herbert Ross. For the next two years they traveled abroad, performed in clubs, concerts and made two LP recordings: Hi Fi Calypso, Etc. & No Cover, No Minimum. They toured throughout the United States and Canada until Austin was drafted – unexpectedly – into the U.S. Army.

Besides performing, Austin periodically conducts an acting workshop which includes attention to Speech & Voice. As a trained movie scriptwriter Austin has coached many others. He is a member/dramaturge of CART, West (Caribbean-American Repertory Theatre, West) and is currently developing “WHAT’S THAT SOUND? ”, a definitive documentary on the history of the Trinidadian Steelpan. Partial Listing of Credits: